Skip to main content
We all like to share news stories with our friends on social media, but do any of us check if the stories are actually true?
Image
Topics
Safety

Sharing news and stories with our friends on social media can be fun. When we learn an interesting fact, or something makes us laugh, many of us will send it round to other people who might be interested. We can't be doing anything wrong, can we?

Well, in recent years there has been an increase in the number of made-up stories and false news reports being posted on the internet. If we share these made-up stories and treat them as true, we could actually be causing people to make misinformed decisions. We need to know how to not become influenced by this ‘Fake News’.

What is fake news?

Fake news articles are simply stories and news reports that aren't true, and there are thousands of them around. Now that everyone has access to technology like website-builders and Photoshop, they are much easier to create than before. 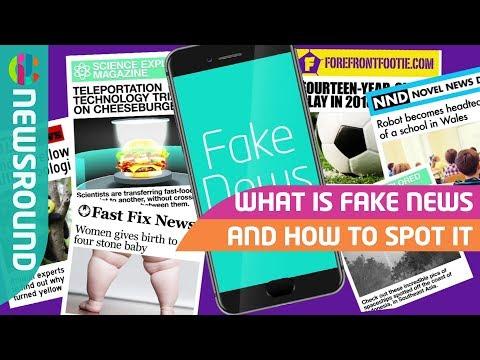 How can you spot fake news?

Here are some questions to ask yourself when reading a news story:

If the answer to one of these questions is ‘no’, then it may be a fake news story.

Where does fake news come from, and why is it bad?

Some fake news are real stories that are reported incorrectly, because the publisher was not very thorough or wanted to exaggerate a story. This type can have many negative impacts: if people keep seeing stories that are factually incorrect, their trust in social media and news stations may decrease – which will become a problem if people stop believing reports that are true.

However, some people write completely imaginary stories deliberately, to prank people into believe something that’s not true, or to get people to view their other posts and websites. This news can cause people to make misinformed decisions. In the 2016 US presidential election, hundreds of fake news stories were spread around about both candidates – and lots of people think this caused citizens to base their votes on false stories!

If people only read and send stories that appeal to their own views, they are basing their views on ‘confirmation bias.’ They can get trapped in one viewpoint, which is repeated over and over again on social media, which is called an ‘echo chamber’. If this view is based on fake news, people can get trapped in a false version of reality and struggle to understand what is really going on around them.

Instant expert: 'The filter bubble' is a theory that computers filter adverts and search results based on what we previously liked, and it may be causing the spread of fake news! Read this interview with activist Eli Pariser on how he thinks this caused echo chambers in the US election.

Some people don’t want others to read the real news as it contains facts that disagree with their personal viewpoints. Some of them even tell others on social media that the real news is actually fake news! However, they are just sharing their opinion, and not the facts.

In order to identify the real news stories, go back to the seven questions. Work out how many of the questions answer ‘yes’ and then decide logically if it should be true. If you are still unsure, do some more research on well-known websites.

Quiz: Think this seems relatively straightforward? Well, when so many stories are fake it is sometimes hard to identify the real ones! See how well you can do in an online quiz.

What can I do?

Everyone can play a part in reducing the spread of fake news while enjoying social media at the same time. There is no need to stop sharing stories, but if everyone checks that a news story is true before they share it, then less people will be stuck with the problems of fake news. If we all do this one simple thing, we will have a better experience on social media for longer!

Instant expert: If you want access to more information, more handy tops or a range of interviews with reporters on the impact of fake news, check out the Newsround Fake News website

The internet is an important part of life and learning, but you should be aware of problems you might have online and take steps to be safe.